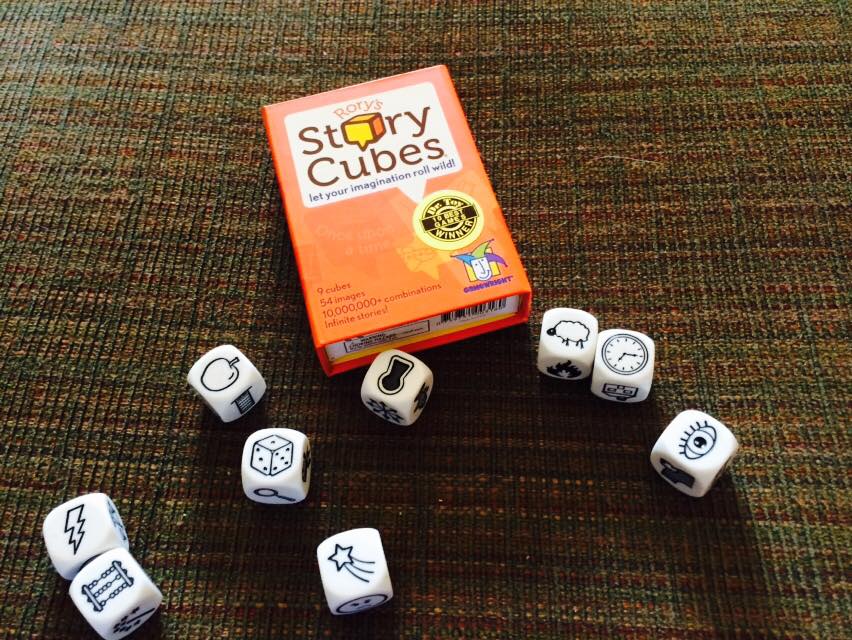 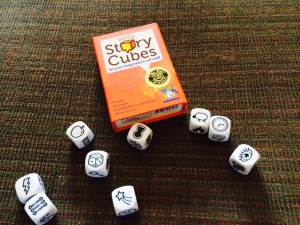 I have a brilliant idea to share with you… and I can honestly call it brilliant somewhat objectively because it is not my idea. I am stealing it. It is pure theft. Well… I guess that it isn’t theft since the creator of the idea gave me permission, but regardless, I am going to write an entire post about an idea that had its genesis in the mind of a much wiser mom. Thank you Shiloah for this gem!

I was listening to the HECOA: NOT BACK TO SCHOOL CONFERENCE and nearly dropped the basket of laundry I was carrying when I heard it mentioned in Shiloah Baker’s Foundations In Greatness: Setting Up The Foundation presentation. A very creative use for Rory Story Cubes that would animate our family discussions about our current read alouds.

These cute and cozy little picture die have been used in homeschools for as long as I can remember. A creative child or parent would shake them, roll them out and then make up a story based on the pictures that presented themselves. I love the concept but my little crew (myself included) is just too pragmatic for anything so creative. We have had these, failed to really enjoy using them and then moved them on. (Picture me kicking myself now)

Shiloah puts a different spin on them. Sure, they can still be used as such but they don’t have to be. What if they could be used as narration prompts instead? What if you could hand 1 of them to your five year old and ask her to roll it and then tell you something about the story that reminds her of the picture on the dice? Now suddenly, narration is no longer an informal quiz session but an opportunity to retell things that are fresh in our minds and that have connected with our hearts.

This idea struck a cord with me and so I ordered them. That same afternoon.

When I took them out of the package I nervously stared at them and wondered how they were going to animate for me. I felt anxious and wanted to make sure that our first re-exposure to them was a good one.

Without looking at which ones, I grabbed three and rolled them in my hand. I gently rolled one of the three onto the table. It landed with a picture of many arrows pointing in different directions. I stared at it perplexed. What was that symbol? What did it signify? Why wasn’t there an answer key in the box that at least told you what each picture was?!

I took a deep breath and just thought about the arrows and our current family read aloud: The Lonesome Gods by Louis L’Amour. Bingo! Direction. The arrows signify direction and much of the book is about travel! So, I smiled and asked my kids which direction Johannes is traveling when the story begins. It immediately launched into a conversation about North, South, East and West. We talked about where Santa Fe is and where Los Angeles is. We were headed in the right direction. 😉 Next, an airplane was rolled. I asked the kids which vehicle or mode of transportation they were using in the book. Of course, I had answers of “on horseback” and “covered wagon”. Next, we rolled a ?. I asked the kids what question Johannes was trying to answer. They each had a different one and all were true. Johannes didn’t know what his grandfather was like. He didn’t know who Tahquitz was. He didn’t know who had built the stone house. He didn’t know why the Indians were afraid of it. He didn’t know how much longer his father would live. Finally, we rolled a triangle. I asked them where we see triangles in the story. One of my children mentioned that the Indians have triangle tips on their arrows. Another mentioned that the Indians live in teepees.

A few nights later, we used them a little differently. We passed them around the dinner table and we used them to tell stories about our read alouds. You could tell anything you wanted as long as it connected to the picture that was rolled. Then someone rolled a picture that reminded them of something in science we had done that day… you can imagine how the game adapted again.

One of the great joys about this homeschooling journey is that we really can “just make it up as we go”. Sometimes, however, it is so wonderful to have someone else’s creativity prime the pump of our inspiration. What about you? Do you have a fun twist on story cubes? Have they sparked a fun new dinner game for your family? Please tell! I would love to steal your good ideas too… and I promise to give you credit.

You are a genius Shiloah Baker. Imitation here is the most sincere form of flattery.