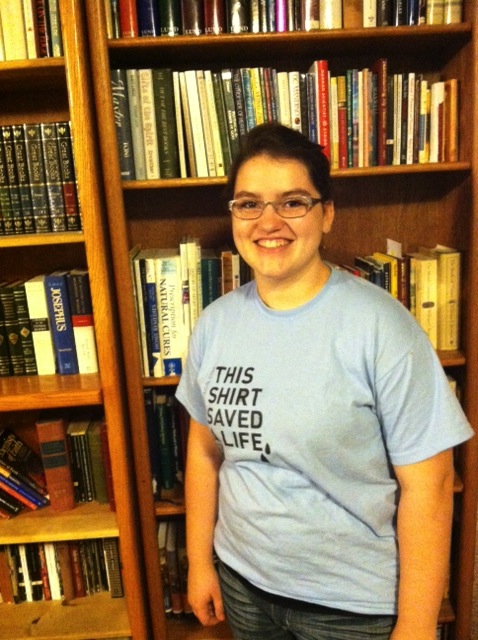 My daughter Charisa just turned sweet sixteen last month. She recently finished a course by the Botkin sisters called Reclaiming Beauty.  She learned so much from this course.  She learned about being beautiful from the inside out.  They talked about how women today try to “buy” beauty such as: photoshopping, air brushing, plastic surgery, starvation diets, grotesque catwalk styles, and billions of squandered dollars.  The course really focused on the Biblical principles of beauty and that a beautiful woman especially is one who is modest, who serves others, and who strives for excellence in everything she does.  Other topics they covered were: Skin care, fitness, posture, voice, modesty, homemade beauty products, color analysis, and how to clothe yourself better for less.

After being inspired to give more to others, she decided to learn more about the people in Africa.  She was saddened to see how poor and destitute the people in Sudan are and their broken wells or lack of access to clean water. She realized how many people die from drinking dirty water and how easy and inexpensive it is to give a simple service to save and/or improve lives.  She decided for her sixteenth birthday that instead of thinking about herself, she would give to others in serious need.  She found the 100 Wells Campaign which is a Christian based philanthropic organization attempting to rebuild wells and build new wells to provide fresh drinking water to the poor and destitute people in the Nuba mountains in Sudan, Africa.  She asked to have a birthday party (normally we take our birthday kid out to dinner and a movie and shopping afterwards), and asked all of her friends to donate money to this cause in lieu of gifts for herself.  She was so excited to have raised $80 to send to this campaign.  She and some of her friends earned some t-shirts (seen above) as a gratitude gift.

The owner of the organization was so impressed with the dollar amount that she sent and her age, that he personally called her up to thank her.  She explained what she did to gather the money.  He was so grateful and shared how they used the money and how much it helped the people in Sudan.

I’d like to say I gave her the idea or that I would have even thought of something like this at her age…but I cannot say that.  I’m so teary-eyed proud of her and what an example she is to me, our family, and her sphere of influence.  May we all strive to participate more in giving to others.  To be involved in or create our own philanthropic cause. We are all so blessed and where much is given much is required.  She is truly beautiful to me…inside and out.

“Charity activities are the force which gives our life meaning.”~Mazhar El Shorbagi

“Giving is a universal opportunity. Regardless of your age, profession, religion, income bracket, and background, you have the capacity to create change.”
Laura Arrillaga-Andreessen – Philanthropist